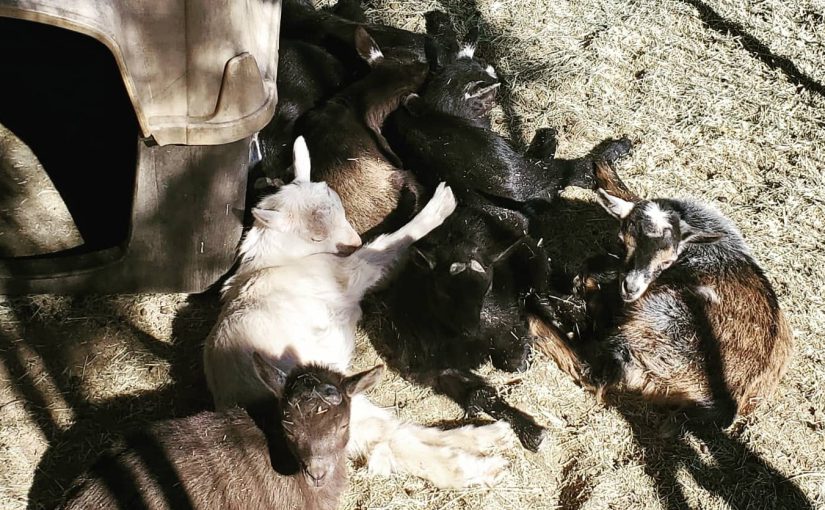 Pinto Bean (Buck)
Pinto Bean is Polled meaning he is genetically born without horns. This gene is dominant and more likely than not to be passed to his offspring.
Cayenne (Doe)
This will be her second time being bred. Last season she had triplets, 2 boys and a girl. We retained one of her bucklings last season, Ancho because of his beautiful coloring. Pinto Bean was also the sire. We’re hoping to get a doeling (baby girl) that is polled with Ancho’s coloring this year.
Due: Between August 23rd and September 23rd

Poblano (Buck)
This will be the first year that we are breeding Poblano. We purchased him because of his genetics (Polled & Blue Eyed) and because of his beautiful coloring. Poblano is only 1 year old.

Ember Pepper (Doe)
Ember is our littlest doe and we waited this long to breed her because of how small she is. I wanted to make sure that she reached her full size before breeding. Ember was only 2lbs 1oz when she was born and named after the smallest pepper in the world because of how tiny she was. Ember was born December 5th 2019 and is now almost 1.5 yrs old. She has pretty colors and I’m excited to see what colors her kids will be.
Due: Between August 23rd and September 23rd

Poblano (Buck)
Info above
Fraulein (Doe)
Fraulein (pronounced Fray-lean) is the granddaughter of Roweena. We just purchased her from Turquoise Daisy & Budderbean’s Dairy Goats this year and are very excited to have her. Fraulein is 10 months old, Polled and Blue Eyed which are traits that we are very excited to have in our goats. Since Poblano is also Polled and Blue Eyed all of their babies will be too.
Due: Between August 23rd and September 23rd

AND not on the schedule but accidents happen and Poblano is a sneaky boy being tempted by Roweena while she was in heat:
Poblano (Buck)
Info above
Roweena (Doe)
Roweena was also purchased from Turquoise Daisy & Budderbean’s Dairy Goats but over a year ago. She is not a show quality goat because of her small udder BUT that isn’t something I’m focusing on with my herd yet. Roweena is a sweet girl, very easy to milk who loves to chew on your clothes. She is very affectionate AND she is Polled with Blue eyes. I had not planned on breeding her this early in the year but, Poblano found his way to her and we’re pretty sure he did the deed. We will later have the vet do an ultrasound to confirm. If she is pregnant then she will be due September 20th-25th. Their kids would be Polled and Blue Eyed.
Due: September 20th